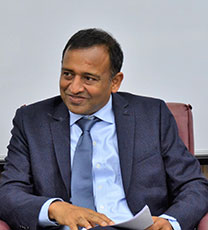 Dr. Suresh Ramanathan is the Dean & Principal of Great Lakes Institute of Management. Prior to joining Great Lakes, Dr Suresh was an Associate Professor of Marketing at the prestigious University of Chicago Booth School of Business between 2002-2011, and later, Professor of Marketing for close to 8 years at the Mays Business School at Texas A&M University, holding the David R. Norcom’73 Endowed Professorship. Suresh joined the world of academia in 1997 after spending ten years in industry in India. He received his Ph.D. from NYU’s Stern School of Business in 2002. Suresh has a B.Tech. in Chemical Engineering from the Indian Institute of Technology, Delhi and an MBA from the Indian Institute of Management, Calcutta. Prior to joining the Ph.D. program at Stern, Suresh worked with Brooke Bond (now Unilever) in their tea and coffee business for three years and then moved to the world of media and advertising, where he worked with JWT, Lintas, MTV, and McCann Erickson for seven years. He was part of the core leadership team at MTV India, helping launch the channel in India in 1996, and then head of media research at McCann-Erickson India before leaving for the US.

Dr. Suresh is a leading academic expert on consumer emotions and motivations. His research focuses on the role of changing emotions and goals in different domains, such as social consumption of experiences, self-control and impulsive behavior, health-related marketing and sales promotion effectiveness. He is presently investigating the role of customer engagement in brand experiences and the effectiveness of social communities in driving customer engagement. Suresh’s work is highly cited in the academic literature and has also received extensive mention in the popular press, including New York Times, CBS News, Times of India, Los Angeles Times, and Science Daily. He was till recently on the Editorial Review Boards of the Journal of Consumer Research, Journal of Consumer Psychology, and Journal of Retailing, and also serves as an ad hoc reviewer for several other journals in marketing. He has published his work in the Journal of Marketing Research, Journal of Consumer Research, Journal of Consumer Psychology, Psychological Science, Journal of Advertising, Journal of the Association for Consumer Research, Journal of Retailing, and Marketing Letters. In 2007, Suresh was identified by the Marketing Science Institute as a leading Emerging Scholar in Marketing, in recognition of his work and potential. He is also the recipient of the SCP-Sheth Foundation award for best doctoral dissertation proposal in 2001, and the Herman Krooss award for best doctoral dissertation at the Stern School of Business in 2002.

Dr. Suresh has deep expertise in research methods and statistics, including multivariate regression, conjoint analysis, factor analysis, multi-dimensional scaling, time series analysis (time and frequency domain), and analysis of variance, among others. He is also very familiar with neuroscientific research methods such as eye-tracking, functional magnetic resonance imaging (fMRI), facial action coding for emotion measurement, etc. His statistical expertise provides the opportunity for deep analytical dives into data, while his academic knowledge allows him to generate profound insights from the data for even the most complex research questions. Suresh has domain expertise in advertising and sales promotion effectiveness, consumer attitudes and decision-making, brand equity and brand health, and customer satisfaction and engagement.

Dr. Suresh is also a renowned educator. He has taught at all levels in business from undergraduate to EMBA and executive education. His core teaching expertise is in Consumer Behavior and Brand Management, which he has taught for over 20 years at various institutions in the US, Europe, and Asia. He has taught Marketing Management and Advanced Marketing Strategy in full-time and professional MBA programs at Chicago Booth and Mays. He has extensive experience in executive education, and has conducted modules on customer value creation, brand equity and brand valuation for mid- and senior-level executives. Suresh has also taught a module on customer and brand value in the Executive MBA program at Mays, and has previously been a member of the visiting faculty in the EMBA program at the University of Michigan Ross School of Business.

“The Dynamics of Goal Pursuit: Situation and Personality as Determinants of Goal Stickiness and Switching,” in Routledge Companion to Consumer Behavior, ed. Tina Lowrey and Michael Solomon (2017)

Editorial Board member/Editor of Journals

Co-recipient of T3 Interdisciplinary Grant for $30000 to study neural correlates of decision-making, 2017

Recipient of MSI Grant for $15,000 to study Dynamics of Social Communities,2014