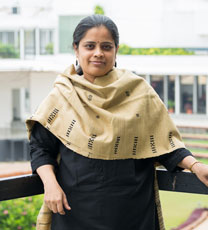 Dr. Vidya Mahambare is currently Professor of Economics at Great Lakes Institute of Management and is also the Program Director for the institute's two year PGDM program since 2016. In addition, in her capacity as a chair professor of Great Lakes-Union Bank Centre for Banking Excellence, she is the conveyor of the centre's annual finance conference since April 2018. She has experience in teaching the PGPM, PGDM, PGPM-Flex and PGXPM batches at Great Lakes Institute of Management, as well as teaching Macro and Micro-Economics to RBI's newly recruited officers under the customized corporate program at the RBI Staff College, Chennai. Prior to joining the institute, she was a Director and Principal Economist at CRISIL, a Standards and Poor's global analytical company providing ratings, research and policy advisory. She has also been the Independent Director on the Board of Directors of SMERA Rating Agency, India, and a member of the Economic Affairs Committee, ASSOCHAM, Tamil Nadu. Earlier, Vidya was with Cardiff Business School, UK, from 2001 to 2005 where she had moved after completing her doctorate from Lancaster Management School, UK. At Cardiff, she taught courses related to international economics, microeconomics, modern business enterprise, and econometrics. During the same period, she was a research associate at Liverpool Research Group in Macroeconomics, UK.

Impact of culture and gender norms on social and economic outcomes, Strategies for financial inclusion and development