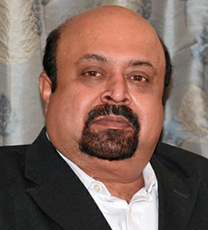 Prof. V.C. Vivekanandan has three decades of teaching and research experience in legal education and served NLS-Bangalore and NALSAR-Hyderabad between 1990 to 2017. He also was the Dean at Rajiv Gandhi School of IP Law at IIT Kharagpur between 2009-2010 and was the founding Dean of the School of Law at Bennett University at Greater Noida during 2017-2019.

He holds a Bachelors Degree, Master’s Degree and PhD degree in law apart from a Master’s and M.Phil . degree in Public Administration. Prof. Vivekanandan was appointed as the MHRD Chair Professor in 2008 -2009 and again from 2010 to 2017. During this tenure, he was also representing Government of India negotiations in SCCR meets at Geneva as an official delegate from 2013-2015.

He was an elected member of the At Large Community (ALAC) representing Asia Pacific region participating in the deliberations of the Internet Corporation of Assigned Names and Numbers (ICANN) between 2008-2010 and later became a member of the Nomination Committee (NOMCOM) of ICANN between 2010-2012. He was the founder Director of the Legal Information Institute of India (LII of India) during 2010-12 as part of the Free Access to Law Movement (FALM).

He also served as the NWO-ICCR fellow at Maastricht University School of law and as Invited Scholar at the Institute of Intellectual Property at Tokyo in 2010 and 2015. He is also an adjunct visiting professor for SUNY Buffalo Business School since 2007 for their programmes.

Prof. Vivekanandan specializes in teaching, research and advocacy of the fields of Intellectual Property Law and Internet Law. He also established the NALSAR Proximate Education at NALSAR University and headed the division between 2001-2009 and 2010-2017, which offered PG Diploma programmes of Patents, Cyber Law, Media Law and International Humanitarian Law. The division also ran a Master’s programme in Tax and Business Law for the probationers of the National Academy of Direct Taxes (NADT) Nagpur during 2008 to 2016.

He serves as Jury with CII on the selection of IP awards since 2015 and also served as a Jury with Pharmexil for IP awards in 2013-15.

His non-law interests include music, cinema and travel.