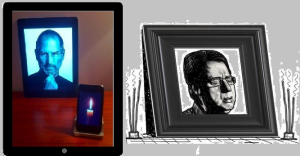 Amidst all his glory God does get unfair at times – if not before he has surely has been so in the past few days! First Steve Jobs and then Jagjit Singh were lost to the vagary of death – the two stalwarts of their own fields! The world mourned from the beaches of California to the plains of Punjab and everywhere else in between. In the world full of conformists and traditionalists there is always a dearth of original thinkers. The above two personalities were not only original but they had the courage, conviction and drive to introduce new vistas of possibilities to the world. I have been a huge fan of both and at this great loss I could not stop myself from drawing parallels between the two amazing personalities.

‘Never compare apple with oranges’ goes the saying. One may laugh at an attempt to compare Jobs and Jagjit – there is nothing remotely common between them! While Jobs has spent majority of his life in the USA working on pioneering technologies and designing devices, Jagjit Singh was the Indian musician of a rare art form known as ‘Ghazals’.  While Jobs was a straight faced English speaking American, Jagjit Singh was a typical Indian with mix bag of language skills including English. In all possibility, the two would have never met all their life and I won’t be surprised if they didn’t even know of each other. So is this attempt to compare them a mere hyperbolae or an eccentric attempt to read too much into their lives? No.

The learned say – the basic principles of life remain the same irrespective of times, geographies and people. There is a method in the madness of the world and pioneers are those who champion these methods. It is on these lines of thoughts that I intend to compare the life, time and work of the above two distinguished figures. To put a structure to thoughts let’s pick certain headings.

Innovation and Self belief

Steve Jobs – the founder of ‘Apple’ and creator of many modern design marvels – once struggled to save his company. In the era dominated by Microsoft Windows and PC – Jobs believed in the viability of devices powered by Mac. Jobs was proven right when the Apple Macbook and the subsequent launches from the company were highly successful. Jobs proved his mettle again when he redefined music listening thorough the breakthrough product – iPod! In combination with iTunes – the product reaped rich harvest for the company. Not long ago he bettered himself with the bigger brother of iPod and a yet again novel idea – iPad. His belief in himself and his ideas lead to the classic innovator Jobs was.

Jagjit Singh entered the musical arena in the 70s. The Indian music industry in the films was dominated by the giants in Kishore Kumar, Mohd. Rafi and Manna Dey to name a few. Being turned away by music directors citing his ‘unsuitable’ voice – Jagjit decided to pick his first love – Ghazals. Ghazal singing in those days was a niche and secluded art form. The singers like Mehndi Hassan, Begum Akhtar and other proponents of classic style left no space for a newbie. Jagjit with his wife Chitra launched his first album ‘The unforgettable’ in 1976. With an emphasis on melody and choice of ghazals, he propounded a new simplistic form of rendering ghazals. This diversion was often jeered at by the traditionalists, but it was this unique simplicity that he brought to the art that has won millions of hearts world over!

Keep it Simple – Touch the senses!

While the world wondered about usability of a phone with no keypad – Mr. Jobs made use of one of the natural senses of ‘touch’ and ushered the touch screen revolution headed by iPhone. The minimalistic designs of all the products from Apple are testimony to the fact that simplicity is special. Be it the user friendly click wheel or multi-touch pad of its laptops – Apple has kept design as simple and natural as possible and the credit goes to the visionary Mr. Jobs.

Jagjit Singh is often credited with bringing the Ghazals to the masses. One of the prime reasons for his success in making it happen was the simplicity of his tunes. Jagjit’s music relied more on melody rather than the technical nuances or classical rendering. It did not require one to be an expert in music to appreciate the soothing and calming effect his sonorous voice created backed by simple and pleasant tunes. The aim of his music was to touch the audience and not impress them! This simplicity and the intention of touching souls did resonate and how!

World is not fair – get used to it!

Imagine being kicked out of a company you founded and that too by a guy who was hired by you! Sounds so unreal – but Steve Jobs faced it. His reaction? Founded another company based on an altogether different idea, nurtured it well. However a talent as big could not be missed for long – he was called back to Apple, when the company was in doldrums. Rest, as they say, is history. Jobs and Apple never looked back. The take away is the man did now succumb to the circumstances anytime; he let his inner self always be stronger than the outer influences.

Jagjit’s life has been full of troubles. He left for Mumbai from his native place to become a film musician, only to return empty handed and without ticket to his hometown. He gathered courage went back and thus started a long phase of struggle. He sang in private functions, small functions and gradually grew to rule the roost one day. When things looked just perfect he lost his son aged merely 18 years to a car accident. Life was never the same – his singing partner and wife withdrew from the profession and never sang again. His music attained a new high after this very sad loss.

There are many more such similarities to ponder over – and that’s the beauty of the common thread that weaves through such magnetic personalities.

Being an apt representative of the modern society at large – the Spartans fraternity at Great lakes too shared the condolences. Sridhar Venkataraman, Smruti Rekha Padhy and many others have expressed the emptiness they feel after these losses. Abhilash Mohapatra says about Jobs – ‘In this dynamic world very few have been the personalities who have added revolution to the rotating earth. One amongst them who has touched everybody in their mind was Steve Jobs. He affirmed with his work that world can be made a better place. Innovation has much longer to go. He not only inspired with his trail but with his spirit of innovation as well’

Richa Chauhan shares her feelings as – ‘Jagjit Singh the velvet voice that will never be heard again. “Kal Chaudvin ki raat thi” and ” Tere aane ki jab khabar” are like the background music of my life now. Time flies with his voice. Sad that now the treasure is limited. No more will be added to it ever now. I’ll always regret I never had chance to hear him live. One regret I’ll always have to live with. RIP Jagjit Singh’

Abhilash pays homage to Jagjit Singh – ‘Jagjit singh a name synonymous to ghazal, never did one express feelings the way he melodiously sung them. They say there are five elements in this world but Jagjit sahab made all of us realise the sixth element MUSIC that touches the soul. Generation might come and go ,the soul in his songs would remain forever – chitti na koi sandesh,Janney woh kaunsa Desh jahan tum chaley gaye’

If I may conclude – the most important similarity is that both of them touched millions of hearts during their stay on Earth! May their souls rest in peace! Heavens will take pride on playing the best of the music on best of the music player now.